Home » Polarity and Consciousness: Co-Creating the Shift of the Ages

Polarity and Consciousness: Co-Creating the Shift of the Ages

The signs are everywhere, or so many would want you to believe.  Just turn on your TV, (if you are
really called to do so), tune into talk radio, pay attention to the heated
conversations loudly shared at public places and sooner or later you’ll hear
something like one of the following:

“The signs of
the end times are here!”

“Jesus, (or
Allah, or whomever), is coming soon… are you ready?”

“The Mayan
calendar is ending and so is the world!”

While these are statements are generic composites, chances are you have
already heard or will hear some other closely related declaration.  These statements are usually shared
with a surreal sense of glee by the deliverer, and leave many pondering
fear-filled thoughts and emotional puzzles to work through.

It was not so many years ago that these conversations focused around
the millennium and our need to store water, hoard food and prepare for the end
of the world.  Remember when we
were all going to wake up on January 1, 2000 and discover that something
magically “went wrong” around midnight.  There were groups that went into mountain caves, survivalists who
stocked up on ammo, and the holdouts who were ready
for anything.

Sounds familiar to the experience of now, however there is one marked
difference as we delve into this moment.  And it is this difference that has brought us to the collective
co-creative moment that is undisputedly upon us.

What is this difference?  It is the marked increase in polarity and fear combined with the levels
of consciousness that have now anchored on our planet that have brought us to
this new moment.  This moment has
been rising steadily throughout the ages and has arrived whether we feel ready
or not.  Humanity has left many
markers along the way and it is now our job to remember the essence of these
markers instead of allowing the newly powerful and highly persuasive mainstream
media to be our interpreter.

All of this energy IS the Shift of the Ages:  the co-creation of consciousness plus polarity that forces
us to gaze into our deeper knowing and propel beyond the illusion that is
presented with force and believability.

Many of you may already be familiar with FOX news and their devoted
team of “reporters” who daily do their best to persuade you of their point of
view.  While recently coming out of
the shadows of political preference through their donation of one million
dollars to the Republican party, they have also
unleashed a new brand of tele-evangelist in the name
of Glenn Beck. 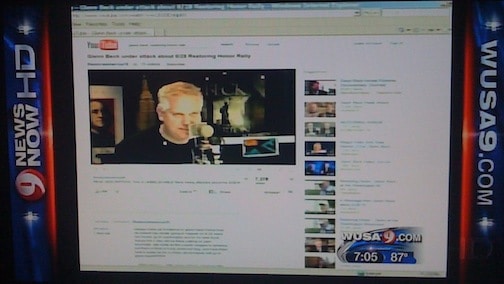 Now take a moment, bring a hand to your heart and breathe. Our intent
is not to offer you any form of judgment or opinion about FOX or Glenn.  We are, however sharing with you our
DIRECT first-hand experience of the power of polarity and the importance of
holding a level of consciousness that can gaze at the polarity with the
recognition of a divine plan unfolding.

In mid-August we were invited to appear as keynote speakers at a world conference
that gathered attendees of expanded consciousness from 22 countries in
Washington DC.  This was truly a
beautiful gathering of people who could set aside all political, racial, and
national interests for the benefit of co-creating a positive vision for
humanity.

This event has been held continually for 23 years and each year the
location is determined based upon the founders assessment of the prior years
global activities and where the most positive influence could be offered on a
planetary basis.  How perfect that
Washington, DC, USA was the chosen location for 2010!

As the week long conference unfolded the energy of true community
emerged amongst the hundreds of attendees and presenters and it was decided
that on Tuesday, August 17, the entire conference would go forth to every
corner of DC and simply allow the power of co-creation to work through them.

While this may seem absurd to some, and awesome to others, the fact is
what happened to us personally that day was truly a divine gift.

Leaving our hotel early in the morning we were personally called to
visit the Lincoln memorial.  We
cannot share with you exactly why, it just felt that there was something there
for us to re-discover.  It was a
typically hot, humid summer day and we arrived at the Mall area of the
Smithsonian.

Making sure we had plenty of water for our mile long walk past the
Washington Monument, the World War II memorial, and the reflecting pool, we
finally arrived at the steps of the imposing memorial of Abraham Lincoln.

Experiencing fatigue and extreme heat, we did not let our bodies or the
vast amount of steps stop us from climbing up into the area that houses the
immense statue of Lincoln.  Arriving in the main chamber, whether you have ever visited or not, you
immediately feel a sense of “all that was ever right” with democracy
overwhelm you.

We were immediately greeted by a beautiful couple who had arrived in the US from Nigeria for the world conference and our mutual love
and appreciation for each other and the beauty of the four of us standing
together was filled with great joy for us all.

We then went to the left far wall of the memorial and read the larger
than life inscription of the Gettysburg address.  The words were potent and ominous.  They were so profoundly filled with truth that we wondered
if we had ever really read or understood them before.

As you turn from the Gettysburg wall and stare across the monument you
discover another larger than life inscription.  This was of Lincoln’s SECOND inaugural address. This one
took our breath away and we literally sank our backs into the large marble
columns as we read each paragraph with new perspectives and heightened
awareness.

This was a profoundly expanding moment: a rarified insight where you
can feel the energy of Lincoln speaking loudly to the polarity of today through
the events of the past.  It was
truly beyond words and left us in a tender place as we decided to walk down the
steps and begin our voyage back to the Smithsonian.

As the universe would so beautifully arrange, as we were walking down
the steps of the Lincoln memorial we noticed a fairly large camera crew and
reporters gathered at the bottom of the monument.  Filled with divine inspiration and still feeling very tender
from our experience, we did our best to walk as far away from them as we could.

When we were just at the bottom of the steps we found ourselves
“spotted” by the lead reporter who ran after us in her high heels!  Sensing that we needed to chat with her
we turned around and engaged in conversation. 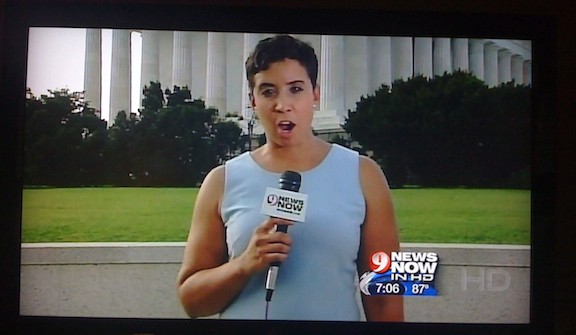 To our surprise the conversation centered around the polarity that is
being demonstrated on our planet and specifically around the proposed August 28th gathering at the Lincoln Memorial spearheaded by Glenn Beck.

She was engaging, articulate and seeking answers.  She wanted to know how we viewed this
gathering that was being held on the anniversary of Martin Luther King’s famous
rally and that many supported this gathering as a way for Beck to “support the
troops.” 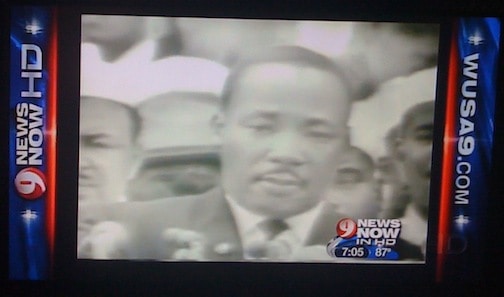 We agreed to be filmed and shared openly from our hearts.  Kira invited
everyone watching to put their hands on their heart and here is part of what
she shared with the reporter and film crew:

We actually spent 10 minutes with the film crew and shared extensively
about the polarity and consciousness connection of these times.  The reporter and the film crew were all
delighted with our conversation and commented that Sri’s comments were: “The
most intelligent thing anyone has said all day.”

As we do not even own a TV, we had not been aware of this heated debate
and we were also not attached as to whether or not our comments would be
broadcast.  The moment with the TV
crew was perhaps the moment that was called for.  An opportunity to offer them a perspective
that was different from their everyday experience.

And then, we received the gift of polarity and
distortion in action!

Imagine our surprise when on the 7:00 news, this became the second lead
story of the evening.  Imagine our
surprise when they portrayed Kira Raa as an “angry opposed” citizen.  And
while you can still see the tips of her fingers on her heart in the TV frame,
the station took a sound bite out of context after a false build up about Kira’s opinion and from the entire segment they aired:  “It saddens me that the right to
free speech is being used to encourage so many to be so angry.” 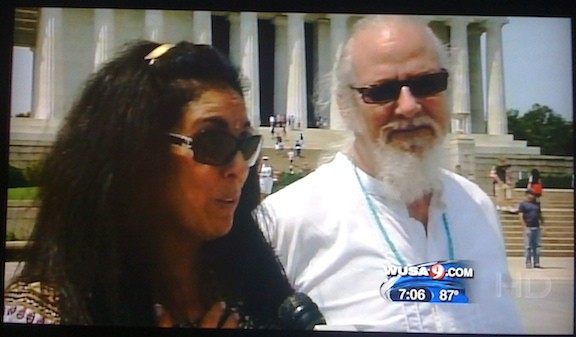 It did not matter what those behind the camera may have experienced in
person.  It did not matter to them that
the fullness or the full truth be broadcast.  What DID matter was the need to create polarity, because
simply put, polarity sells and with it so does the propagation of half truth.

Smiling at the experience, we realized that the gift of this day was to
fully be immersed into the polarity so that the positive consciousness energy
could be anchored from within it .

After all, it was August 17!  The full power of the 17 was guiding every footstep, including the time
it took us to walk to the monument, read the inscriptions, and to literally
prepare to be filmed while in that energy.

With each breath may you remember that you are the CO-CREATOR of the
Shift of the Ages.  And whether or not your energy is captured by a news crew or
witnessed by a person passing you on the street, your ability to release
polarity through the recognition of its illusion is a gift you can offer to the
world.

Now is the moment.

Whether or not you feel you must store water or buy ammo is your
personal decision, and all decisions will carry with them a powerful energy.

Is that energy polarity or is it expanded
consciousness?

Mr. and Ms. Co-creator, the Shift of the Ages is in your hands, what
would you like it to look like?

2 responses to “Polarity and Consciousness: Co-Creating the Shift of the Ages”