The Journey of 2012:
Part One–January

by Sri and Kira

There is an essential energy inside each being of divine light that propels us all to keep going.  While the world may be wondering what we are doing, or our families are scratching their heads trying to decide if we have "lost it," deep within, the essential energy of light keeps burning brightly!

The Journey of 2012 has just begun and already the extraordinary events that will define this moment in history have started to reveal themselves.  Each month we will offer to you the perspectives and insights that are gifted through us from the Archangelic Realm, the Mayan Elders and the Ascended Masters.

It is December 29, 2011, and the High Oracle of the Maya has decided that we must meet for a ceremony.  Contrary to all other ceremonies, he just arrives, without notice.  A simple call from the dock saying I AM here, and our meeting is important.

He arrives with his usual broad smile and humility and we traverse the ancient Mayan trail to the ceremonial site that rests atop an ancient pyramid at TOSA La Laguna.  While preparing the ceremony, he keeps sharing that it is an important day, that this day begins the removal of all remaining illusion and shatters all negative projections. 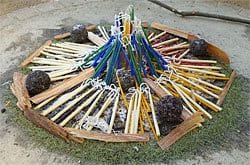 As the ceremony is ready, he invites us to take a picture and share the energy of the ceremony prior to lighting it.  He wraps the ceremonial cloth around his waist and around his head.  He welcomes us to the fire, then his eyes turn to liquid light, he smiles broadly and he says:

"Upon you is the year 2012.  Many believe that this year will end our world as you know it.  They are wrong.  December 21, 2012 is not the end, yet there is great chaos ahead for those who cling to the illusion.  Each must make their choice now to live within their heart and to have great commitment to light.  This is the way to navigate 2012. This is the new world."

He shared much more during that ceremony and often would point out toward the Crystalline City and speak of the Ascended Masters abode and why we were called here to anchor this point of light.

When the cosmic, the human and the heart become one.

New Year’s eve 2012 at Lake Atitlan was magical and mystical.  The moon was strongly illuminated and had a strong portal energy.  It was large and magical and expanded itself several times appearing as if a rainbow.  There was an unusual stillness that is not the norm for the evening.

Most nights the waves become larger and more pronounced as the night wears on, and then again subsiding by morning.  Yet, on the eve of the advent of 2012 the waves were still and the moonbeams danced on the water with great golden joy and invitation.

Gazing at the sky offered a great joy as the sense of cosmic connections was extraordinary.  We smiled as we would watch "energy clouds" that resembled the same color as the sky, move.  As they moved the stars would disappear and then they would reappear after the energy wave moved.

We felt one with the cosmic brethren that were silently moving through our sky and felt the deep presence of the Blue Starborn and the Crystalline City.

Our hearts were guided to offer a Miracle Ceremony on New Year’s day eve as the Ascended Masters have clearly been sharing that all are ready and the sincere hearts will gather and birth the new year ahead.

Gathering on New Year’s eve at TOSA La Laguna, we were honored to have three witnesses here with us as we began this powerful miracle ceremony.

This ceremony ushered in the true beginning of 2012, the birth of the ENERGY of the wave of Unification that is available to all who choose to embrace it.  A moment of ascended sanity was brought forth for those who are holding the light of divine consciousness and the union of human and cosmic energy was profoundly extraordinary.

When the baby Jesus was born, three wise men appeared, finding him by following the light of the star.  They came to offer gifts and brought with them their wisdom.

They were the symbol of all of humanity that was ready to be uplifted and ready to enter the next phase of spiritual growth… to accept love!

On the night of January 1, 2012, three witnesses appeared for the birth of humanity into the next gift of evolution.  They were here as representatives of all of humanity during the moment that a Miracle occurred.

1000 points of light gathered and illuminated the planet with sincerity and love!
Together we ignited the great gift of Ascended Sanity for a planet that will experience itself in all-ways over the coming months.

Three witnesses and all of humanity smiled and humbly bowed their heads.

For together, we have all arrived and together we are ready!

May your heart know that the gift of 2012 is the opportunity to release the illusion and to anchor thyself as a witness to the experience of life in form.

The energetic experience of 2012 has already been put into motion…how you navigate that energy is the choice still before you!

May your choice bring your peace, and may your peace empower your miracles!
It is your time and you are ready.

We invite you to now enjoy the sharing of the three witnesses as they offer you their hearts, their love and their humble sincerity…for you are the witness as well.

“This evening, (Jan 1, 2012), prior to the Miracle Manifestation Ceremony I was on the upper deck at Tosa La Laguna and witnessed some amazing activity in the night sky. Several things in particular come to mind such as a large portal around the moon and pyramids of light showering energy down onto the surface of the lake.

During the Miracle Manifestation Ceremony I felt the presence of a beautiful energy all around me and when I was floating high above the earth as a point of brilliant light I could feel the energy of all the participants as well as a beautiful presence of energy behind me connecting with the many, many, many radiant beings who were also holding presence with sincerity and unconditional love.

Even now as I am sharing this I feel myself melting into that oneness and can feel the unification and complete oneness of connecting with you all. It has truly been an honor to be a witness and a participant and my heart is filled with much gratitude and love for this wonderful and momentous experience.”
MARK…Australia

“Being present at TOSA La Laguna to these extraordinary moments, and being part of humanity and creation is a blessing and I am most grateful.

Tonight, (Jan. 1, 2012), just as the sun set, I felt a wave of energy coming over the lake. The energy was one of freedom, of comfort and infinite love. Later I have seen circling clouds around the moon, and felt a strong presence in the sky.
As the Miracle Manifestation Ceremony started I felt all of us. The 1000 points of light, our cosmic brethren, the Universe. Nothing existed around me , no fear, no worries only love and trust. I still feel it all.

I am honored to have witnessed the turning of the year here and the amazing energies as well as the ceremony tonight. One of the most profound experiences of my life!  I am here, I am ready, I am open, Guide me!”
INDIIYA…Hungary

“A Journey has no beginning and no end. It merely is. It’s not possible in this moment to share the all the extraordinary events that have taken place at TOSA La Laguna in the days and weeks leading up to this evening’s, (Jan. 1 ,2012) Miracle Manifestation Ceremony.

I am uplifted and humbled by what I witnessed in the past two hours alone, beginning with an extraordinary sunset over Lake Atitlan and the surrounding volcanoes. Evidence of Cosmic Brethren in the deepening evening revealing themselves as flashes of brilliant white light; a huge portal opening around the half moon; clouds spiraling into the portal, first in one direction, then another; the sky shifting in plates revealing deeper and deeper aspects of the Cosmos.

Indeed, this is the birthing of a new time for all who are ready to receive its gifts. I am profoundly and deeply moved to be here to share this unique and magical moment.” MOIRA…Canada

Click here for the full recording of the 2012 Miracle Manifestation Ceremony
January 1, 2012 via worldwide teleconfernce

With great love and great appreciation that you have chosen to be here…now!
Sri and Kira

4 responses to “The Three Witnesses”