The day began perfectly! We arose to a mystically beautiful morning here at the mountain center that is the Self-Ascension Sanctuary.  The locals began their daily activities as we were anticipating the arrival of our beloved High Oracle of the Maya.

Arriving with his box of supplies the breezes became gentle and cooling as the sun began to get hotter and hotter.  Already it was clear that something was about to shift!

Together we untied the small bundles of copal, resins, incense, handmade candles, and more.  There was a sacred space created that felt like a “homecoming” and was nestled beautifully in the garden landscape of the sanctuary like an old friend.

Gazing at the beauty of the ceremony just moments prior to igniting it, we were called to take a photo to commemorate this special moment. 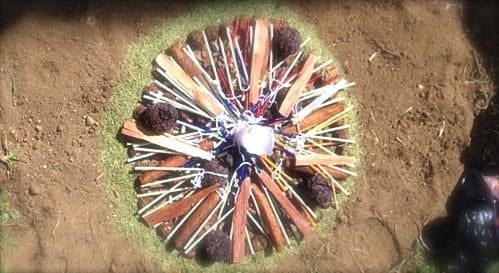 Our beloved elder had visited us on Sunday, March 30 to read the beans.

This is his initial way of consulting with the elders and he expands this 1000 fold during a ceremony. During this consultation he said that it was important to host two ceremonies here.

The first was to be April 14 and the second on May 8.  These were auspicious days he said, and in the moment we truly had no idea it was during a full moon…much less the blood moon full lunar eclipse!

As the fire began there was great joy…from the moment the ceremony started.  Kira Raa was immediately in connection with the Mayan god, Tojil, and to her surprise the moment she was clear on the message given the elder stopped, gazed at Kira Raa and said, Tojil says thank you!  Immediate confirmation that this was a truly powerful and special ceremony.

There is simply too much to share fully in words however the most important is this:

This is the time of great shift and this shift is upon everyone.  Cherish 2014 for 2015 will be a time of turbulence and for those who call upon the great gifts of 2014 they will be the bearers of light and abundance for those who have lost their way.

Everyone who seeks to begin a new life may do so now!  It does not matter what has happened prior to now, it does not matter what you have “done” in the past.  What matters is that your heart is pure and in the energy of service.  You are being granted a new life and it is beginning as of this day!  Celebrate and come forward and the universe will support you.

There were many more messages and a powerful sharing about the numerical sequencing of the number 13, (or sequences of numbers), the years 2015-2022, and so much more.

When the sacred ceremony culminated both Kira Raa and the High Oracle received the same message.  These were HIGHLY SPECIAL AND SACRED ASHES!

On the morning of April 15, 2014, we will collect the ash as instructed by the elders and film this process.

We love you
We celebrate you
Have no fear!
Move forward and know that you are truly in the right place at the right time.

With all our love,
Sri and Kira