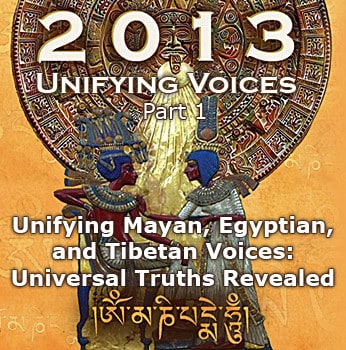 Welcome! You are choosing to read this article, right now, because deep within,
at the core of your essence, the universal truths are preparing themselves to
be revealed through you…Again!

As we soar toward the heightened connections that are upon humanity, whether
it is cosmically, spiritually, technologically or beyond, we are all at THE
threshold of divine re-unification.

This one fact, the momentum and energy of re-unification, has become a distorted
frequency, subject to a myriad of interpretations, messages, prophecies, and
confusion. Yet, deep within this thunderous storm, like a small child crying
for attention, is a unifying voice.

It is the quest for the re-discovery of this unifying voice that has propelled
us all to this moment and the dialogue is brisk and emotions are high. There
is a marked increase in blog posts, news reports and “opinion”.
Does all this chatter serve us? And if it does, how can we as beings of core
love, and light, know our truth? How can we discern which energetic frequency
to tune into?

What if we simply relaxed into the spacious recognition that as we have traveled
many lifetimes on this specific planet, we have left ourselves markers along
the way? The great texts that have survived on our planet all point us to the
recognition that within humanity’s extensive journey on Gaia, advanced
wisdom-filled civilizations have thrived and “mysteriously” perished.
Great upswells of knowledge and luminescent presence have left their markers
for us to discover as we, ourselves, spiritually mature.

If we can allow ourselves to breathe and accept that our former incarnations
had the premonition of this moment in history, would it be so far fetched to
recognize that we would have placed “evidence” of who we are as
a means of reassurance to those who would awaken within a world of great chaos
and amnesia?

Perhaps within our DNA is the wake-up code that automatically ignites when
the cosmic alignments trigger them.

Why has it just been THIS YEAR, THIS MOMENT that we discover that Egypt has
set the bar for non-violent revolt and embracing a paradigm shift? Why have
other countries within the same location been unable to do the same?

Why has the Dalai Lama suddenly requested to be removed as the political leader
of the Tibetans? Why is the Mayan Calendar suddenly a household name?
And, could these three energies, (Egypt, Tibet and the Maya), actually be related?

Deep within the energy of re-unification is the core molecule of light that
is seeded within all beings of love. Through the millennia of soul expansion
on this particular planet we have allowed ourselves the freedom of “Allness”
to create and experience EVERYTHING without limits.

This has led to an extraordinary experience of energy that could not be planned,
could not be pre-conceived and in its highest form, completely supports free
will. Yet, within our experience without limits, the Allness became its own
experience and through that energy, we forgot ourselves…again…and
again.

Yes, we literally created our own “Inception” moment. Is it any
surprise why this theme is being shared with the public…right now?

In the middle part of the last century, China decided that the Tibetan culture
was in conflict with their vision of the future. And yet, the extreme eradication
of this secluded country, the world then became aware of a spiritual experience
that without the Chinese intervention may not have ever spread so freely around
the globe.

Without allowing yourself any judgments of the events that created the displacement
of the Tibetans, can you see the greater expansion of energy that was released
because of it?

Similarly, at the same time the pyramids of Egypt were being activated, and
the Pharaohs were creating great civilizations, so the Mayan Mystics were on
the other side of the “known world”, creating pyramids, charting
the stars and creating in stone the significant records that were necessary
to survive Thousands of years into the future.

All of these cultures recognized our connection with the cosmos and all of
them saw the great need to preserve records in a form that could be understood
by the awake. And, they also saw the need to “code” their records
to prevent them from being mis-interpreted by those who were not awake.

As we all are aware, history then unfolded, wars ensued, the Maya were slaughtered
and forced to convert to Christianity or die. The ancient Egyptian religions
were discredited and the Tibetans eventually run out of their homelands.

The presence of the Mayan calendar in and of itself is a miracle. The numerous
carefully-crafted codex’s that foretold the great cycles of the ages and
the origins of our birth were all destroyed at the hands of well meaning missionaries:
they sought to keep the heathens out of hell!

And yet, the calendar is here, the Tibetan book of the dead is here, the Egyptian
Records have been re-discovered and there is a PROFOUND LINK between all three.

What if these are all the same people…literally?
What if that proof exists and has been carefully guarded and preserved for the
moment of re-unification?

What if that moment is now? What does this mean for humanity?

We are able to break free from the loud clamber that is upon us all. There
is a jockeying for power and attention that is being woven into the 2012 parade
of information. Perhaps if you left yourself a message, eons ago, your soul’s
wisdom is ready to claim it. Would you know it if you saw it? Now is a good
time to cultivate the discernment between truth and sensationalism for the sake
of ratings.

These messages will save our world, if we let them and they were put in place
eons ago! Next month we will reveal these messages, and invite you to put them
into practice into your own life. We are at the moment of re-unification, and
only you can bring yourself to that magic point. Are you ready?